Hi! I haven’t been on this blog for so long, I had to brush the dust off the password. Passwords two years ago aren’t quite as good as they are now… *cough* ilovechocolate11 *cough*

Anyway, this post is about the Cold War. I believe that maybe five years or so before, all the viewers would be clamoring with their own personal anecdotes and corrections to this post. However, for a Year 10 student, the Cold War was much of a mystery to me. The first question that rose to mind was… When?

The view that the Cold War began in 1947 is not entirely accurate. The term ‘Cold War’ was first used in 1947 by Bernard Banuch in his speech: “Let us not be deceived: we are today in the midst of a cold war” and then was used again by Walter Lippmann in his book Cold War. This lead to the misconception that 1947 was when the state of tension between the East and the West became palpable.

The Cold War really began around March 1946. The Allies had used Iran as a supply line for the Soviet Union army but at the Teheran Conference in 1943, they all agreed to withdraw all troops by March 6, 1946. All the Western Allies left the city before this deadline. However, the Soviet Union did not and then sent a division of the Red Army towards the city. Iran, Britain and the US sent complaints to Moscow but this fell on deaf ears. The case was put forward on the UN Security Council. The Soviet Union had a veto (a right to reject a decision or proposal made by a lawmaking body) so the case was denied. Truman, the president of the US, consulted with only his Secretary of State (James Byrnes) before sending an ultimatum. The ultimatum threatened to deploy US naval and ground troops on the Persian peninsula, where Teheran was situated) if the Red Army’s passage was not averted.The Soviet Union not soon after changed the course of the Red Army and withdrew its troops.

However, the problem wasn’t solved but had triggered a bigger problem. America had used threat to try and intimidate the Soviet Union into compliance. Soviet Union responded soon after in turn using threats to make the US give ground to them. Quickly, the display of superiority of each other became a dangerous competition in which neither side was ready to break into war for.

Interesting. In some ways, I feel like the building pressure between these superpowers was more intimidating than a declaration of war, much in the same way that villains are scarier masked. In other ways, definitely not. What do you think? Leave a comment below, let me know and give a suggestion on what you want to find out next 🙂

China in the Medieval era was quite different to the fashions of the modern century. For example, the fashion of China is much of a contrast. No short shorts or crop tops here!!

Peasants of ancient China wore hemp, yep, the stuff marajauna is made of but these guys used for fibers and so clothing. The nobles wore silk. Generally, women wore long tunics that brushed their toes while men’s tunics were shorter. A jacket for the winter was also customary.

A tradition was to wear your hair long. This included men as well as women. This tradition was based on the belief that hair came from your parents and thus it was disrespectful to cut it!!

Another odd tradition was to bind feet into a shape that resembled a crescent or lotus. A rumour has it that this began when an emperor’s daughter was born with deformed feet. The embarrassed dad quickly decided to make tiny feet amazingly beautiful and desirable. Of course, it is quite hard to determine exactly when a fashion began so this is just a rumour.

Quick fact, did you know that the first Cinderella story originated from China (the moral of the story being that the most beautiful woman had the tiniest feet). Remember to comment and suggest down below!! I’ve been thinking of posting on the topic of Australian history again, but then again, I wouldn’t mind reviewing the Mayans…. SUGGEST!!

I was just checking out my sister’s homework and discovered this awesome website: WORDLE!! In fact, you can enter in a website address (as long as it has an RSS feed) and it can mix up those tags and words in the website. I did it with historyromp and look what I got!

Posted in Other, Uncategorized

I got this comment from ‘Mimi’ on Suggestions saying: Could u please review the history of marshmallows.’ Now, although I suspect it’s spam of a sort, I’ve still decided to review it. I mean, history is history, right? So I’m just going to list random facts about this squishy confectionary:

So please, after this post, I’m sure you guys will feel perfectly comfortable to ask for anything… even about me!! Okay, so that wouldn’t be such a long post, but rack your brains and suggest!!

Yeah, he’s that guy that conquered a few countries and such… but who cares? He’s just part of that dusty history book on the shelf. WELL…

Ghengis Khan was a legend who eventually ruled from northern China to the Afghan border, and Siberia to the border of Tibet. However, his early life was a tiny bit more complicated. He was said to be born with a blood clot upon his fist, which prophosised him to be a great and mighty warrior. In fact, Ghengis Khan wasn’t actually even called Ghengis Khan… that happened much later on in his life. No, his original name was Temujin.

Anyway, after much fluffing up on Temujin’s part with a bride, killing his step-brother and becoming a slave, Khan became a legend and got a freaky cool name to go with it!! Remember to comment and-

Just joking – I wouldn’t leave you hanging. 🙂 For the bride part, Khan had set out to win a bride, Borje, but on the way, his father unhelpfully got poisoned and he had to return. When his mother remarried, Khan was still living with her but grew to hate his step-brother and so, with the help of his full brother, Khaser, he killed the hateful step-brother.

Of course, you can’t just have people killing their step-brothers for any old reason and Temujin became a slave as punishment. Luckily, he was free and ready to rock and roll at sixteen. He went to Borje (the bride) and, luckily for him, she was still single.

Quick-thinking Temujin used Borje’s dowry to gain Ong Khan’s allaince and Ong accepted him as a son. Temujin changes his name and becomes… Ghengis Khan (that must have been annoying for the passports). After much ado, so on and so on, Khan is elected as Leader of all Mongolia. (Khan: Oooh, goody!) 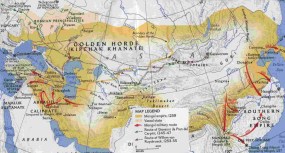 Under Khan’s reign*, Mongolia wiped out much of Siberia and modern Chinese Xinjiang. In fact, Tribes as far away as Kazakhstan heard about lucky old Khan and overthrew their Buddhist rulers to join his army.

This was a one of those really long blogs so I hoped you enjoyed it… I certainly did while I made it!! Remember to comment and like down below!

*Yep, there it is again! For all those who don’t understand this inside joke, you’ll have to read 13th of February – a lucky (and not to mention historical) day!!

Posted in Ancient civilisations, Other

13th of February – a lucky (and not to mention historical) day!!

A few things they did during their reign:*

I’m going to be doing these quick fact blogs now and again to keep this website from getting too rusty! Remember to comment down below!!

Inca and Aztec can often be confused with each other – though if you ever meet one of the citizens from either intimidating civilisation don’t tell them! However, these two civilisations are as different as bananas are to apples. Okay, so these examples are both fruit but they are not exactly the same.

The Aztec civilisation was situated on Lake Texcoco, in modern day Mexico. This is 4720 km away from Peru where the Incas were.  Their (the Aztec’s) city, Tenochtitlan, is now where Mexico city is. The massive city was expanded cleverly, using man made islands called chinampas. The city could be isolated from the mainland by withdrawing bridges. This held a great advantage for the Aztecs against incoming enemies and perhaps was a major factor towards Aztecs power. The Aztecs were conquered in 1521, a a few years after Hernan Cortes set foot in Tenochtitlan .

The Incan civilisation was situated along the Andes mountain range about in the region of Chile in South America. Thier empire was so huge that it had four different land areas, desert, jungle, plains and mountains. Like the Aztecs, the Inca empire was very powerful. However, the population expanded quickly by giving the captured enemies a choice:

Inca warrior: Right mate, you have a choice here.

Inca warrior: Well, you can either die or join my lovely, powerful, rich empire whose warriors are stronger than yours.

The Aztecs either killed their enemies on the battlefield or sacrificed them to the Aztec gods. This meant that although the population would not increase as quickly as the Inca civilisation might of, the Aztecs upheld thier religious values.

This blog is actually answering MJ’s question/comment so thank you MJ!!

This post is just to see what you think about the new ‘theme’. Great, okay, bad or a completely terrible?

Thanks for the feedback!

Now, I’m not talking about the people of Australia like the Aborigines or anything… I’m talking about the actual name. Like how Isabella means ‘Devoted to God’ in Hebrew,this is its origins. Well, Australia’s origin is a tricky one having been formed over a fair number of years. Keep reading to find the rough idea.

Australia came from Terra Australis, right? The word was actually for Australia before it had been discovered and is based from Latin. Terra means land and Australis is Latin for Southern. When Flanders arrived at Australia and did his stuff, he recorded the landmass he was exploring in his journal as ‘Australia’.

In 1817, Governor Macquarie of New South Wales got a copy of Flanders journal and adopted the name given for the massive island. Phillip Parker King, another explorer, used ‘Australia’ in his journals as well and gradually as words often do, ‘Australia’ became the common name of that huge country in the south.

The Ancient Egyptians settled near the Nile thousands of years ago but just because it was a long time ago, doesn’t mean their reasons for settling were old-fashioned.

There was, obviously, water for the Egyptians to drink, bathe in. Less obviously, because there was water, animals would come to drink as well becoming a source of food and meat. The tides of the river helped enormously towards growing crops including a period of time when black silt would gather on the shores and fertilize the crops.

These attractions can also be seen with other countries that are more modern. For example, Australia, whose cities are gathered on the coastlines. Nowadays, meat from animals who come to the shores are not so important but the land is distinctly more fertile and green than the arid plains of the desert in Central Australia.